Photos of the MOB Railway

You are welcome to view the 'Boxcars' page by clicking on the image below. This is only a prototype page but it will give you an idea of the quality of photos I plan to display on this website. My standard will be 100kb per photo, which is greater than most JPG train images at similar train enthusiast sites. Since this is only a placeholder website for now, please visit GRUETZI.COM, my COMPLETED website displaying photos of Switzerland. In addition to trains you will find photos of the alps, animals, towns, villages, transport and people. Thanks for your interest. 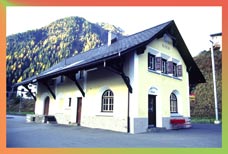 Recent addition: Although Zweisimmen.com is meant for photos of the MOB, I will include some non-MOB information such as this. Click the photo to download a 4.5mb 17-page Adobe Acrobat picture album of the RhB (Rhaetische Bahn) railway station in Susch, Switzerland. These high-resolution images were created to assist model railroaders who are modelling this popular station.

Click here to read my articles on Garden (G gauge) Railroading. There is also a video of an 0m gauge museum layout, and a downloadable pdf version of the instructions for a FAMA brand 0m train set.

The only way I'll ever know WHO visited this site and what part of the world you are from is if you send me e-mail.

Links to all my websites:

Gruetzi.com: Photos of Switzerland, with an emphasis on transport.
Zweisimmen.com: Photos of the MOB (Montreux Oberland Bernois) narrow gauge railway in Switzerland, plus information on G (garden) gauge model railroad projects of mine.
Schau.Biz: Swiss shooting medals, beer coasters, etc. for sale.
BernBear.com: Our log cabin in Greene County, Virginia, and examples of the use of the Bern Bear heraldic symbol on decorative objects.


WebLackey.com: At the moment this site is being used to describe a rare book for sale for $2000, namely, the Numbered (154 of 600) 1928 first edition of Marco Polo's Il Milione, edited by Olschki in Italy.
"Lake" Applet Images: Animated water scenes using the 'Lake' Java applet.